Good evening (or good morning… depending on your POV)! This week, if we were sharing details of our personal lives over coffee, mine would be decidedly decaf!

I’m writing to you while all curled up and ready for bed. It’s after midnight and the #JustAddTea Twitter party will be going down in less than 11 hours… and I haven’t slept yet…

I haven’t made the graphics for this week’s discussion either.

Ironically, the topic is about finding/making time to do something important. For the chat, it’s specifically about finding the time to write, but for me, it’s all about just trying to find that balance.

We’ve reached the point in the year where my free time has begun to dwindle away.

Actually, it’s already pretty close to non-existent. This week, we teachers went back to our “real” jobs.

Tuesday was learning about all the changes to the normal teacher routines. Nothing too extreme. The biggest change was that I had to give up my room with the window.

*Sigh* So long sunshine; it was nice knowing you.

Seeing as I often leave the building after dark, that little window was my link to the beautiful sun and its healing rays of Vitamin D. I’m partially convinced that little bit of sunlight was what kept me from going totally bonkers at a few points throughout the year, so it should be interesting to see how I do now that I’m completely trapped away from the outside.

I just realized that this will actually be the first year since I’ve been there that I’m not on an outside wall, or at least near enough to the outside that I can get a sense that there is a world outside my room! My first year, even though there was no window, I was actually on an outside wall, and then they moved me near to the cafeteria, which has floor to ceiling windows. Last year, of course, I had my windows, but this year… This year my room is in a corner of an inner circle/loop of classrooms.

Moving on (before I depress myself). Wednesday was an ESL training. I didn’t feel like she said too much more than what I already knew. This tells me that either I’m finally entering a veteran teacher mindset, or I’ve just become totally jaded.

The two may be the same thing. Who knows?

Then Thursday, again, there was an all-day training where no new information was actually provided. She told us the new motto or theme or mandatory mindset for this year: Rigor, Relevance, Relationships, and then proceeded to explain the 3 in a very long way…

The whole training could have been completed in about 3 hours, but I think she was supposed to demonstrate how to slow down and build relationships and let the students do the work. Hence the Rigor and Relationships part.

In my opinion, the relevance part was lacking every time she opened it up for discussion. It just became a bunch of adults talking.

And I was ready to kill people.

By the end, I was actually physically angry that my time had been wasted thusly.

Friday we got to work in our rooms. I began mentally rearranging and planning things and ended up buying an office chair. I’ve never had my own chair before. I’ve always just used whatever was available in the room for me, or that I could find around the building.

Last year’s chair was broken in multiple places, but I thought of it as a challenge.

But this year I have a beautiful new chair!

It’s actually a gaming chair, but it was on sale for half price, and since the colors match my school colors (it’s really red… not orange), I thought it would be perfect! And it is!

Putting it together meant I didn’t get much done in my room yesterday, but then today I went back.

This time I had a bookshelf to put together (I’ll probably need another one before it is all said and done), but even with that, I was able to make a little bit of progress. Not near as much as I had hoped, but I will be ready in time.

I guesstimate that I’ll only need a couple of hours more to finish up. Maybe even not that much time.

But I still have plenty to do. I haven’t made my lesson plans for the first couple of weeks (apparently they were due on Friday), and I just found out that I actually have 2 classes I’m supposed to prep for. I didn’t know I was teaching Reading as well.

Actually, I was under the impression that I wasn’t supposed to be teaching Reading, but so be it.

And that’s all I’ve got time for this evening/morning. I need to finish up and get to sleep so I can wake up early enough to get everything set up for the #JustAddTea party! Hope you can join us! See you around the Coffee Share! 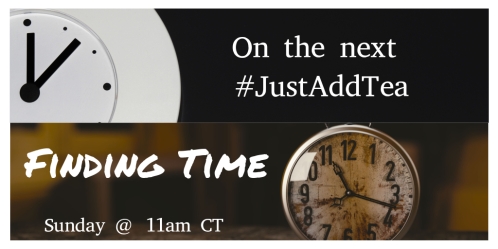 5 thoughts on “Weekend Coffee Share: And so it begins…”