The wheel turns again and we’ve come to the first of the harvest festivals, for those of you of the witchy persuasion. It’s a holiday that I always enjoy. Mostly because I bake a blueberry pie in honor of Lugh the Long-Armed. Blueberries are in season, and I add lemon for the light of the sun, and poppyseeds, as poppies are used to decorate the wreaths in honor of John Barleycorn, who sacrifices himself so that the harvest can be made and the seeds can go back into the earth to be reborn again next year.

Actually, I always put poppyseeds in my pie, but only just learned that poppies go on the Barleycorn wreaths… Sometimes happy accidents happen.

I guess that’s what happens when you don’t get to do as much research as you like.

I’ve always loved the story of Lugh the Long-Armed, also Lugh the Many Skilled, who is the original Jack of All Trades, and yet also Master of All Trades. It appeals to me that there is someone who could master all the arts/trades and still be a warrior. The level of passion and intelligence in such a being is remarkable, and we know how much I appreciate both of those traits.

It is at this time of year when we begin to reap what we sowed back in the Spring.

I had wanted to go back to my Ostara post and look at what it was that I said I was metaphorically planting in my life, but it must have been one of those posts that the last guy found so objectionable. To think, I removed them out of respect for him, and now there is nothing to remember that it even happened (or at least, not anything good) and nothing to look back on.

That was all I wanted from him, really, was a positive experience that showed me that not all men were the same, and that I was someone who others could love. I do not think him capable of the emotion, though he faked feelings well.

But that is not what this post is, and I do not want to sully one of my favorite holidays with a negative remembrance.

I know that I had wanted to make this the year that I accepted myself and found someone who accepted me for who I was (although I had thought I’d found someone who did, and that was nice… while the illusion lasted). I have begun to accept myself more. I’ve embraced that I am not normal and will never be the stereotypical idea of normal. There will always be that part of me that is a bit of a robot, with my own brand of unwavering logic, that doesn’t seem to match the logic of people like the last guy…

My logic is tied to my emotions, and I’m okay with that. I don’t know how to explain that, because the idea of it is already contradictory and I do hate contradictions. Just know that while my decisions are logical, they are also emotional. Perhaps it does go back to my study of Objectivism, and the idea that something that brings you joy is in a way a supremely good thing, and thus something that makes you feel negatively is equally as bad.

And I don’t know about you, but I want more good than bad in my life.

I think I’m finally getting there. This last paycheck was the first time I’ve had enough left in my check to put it into my savings in a really long time. Not a lot, mind you, but I’m making some positive progress and that is fantastic! Perhaps that is part of the blessings that I can harvest this Lughnasadh.

I also have some positive movement in my love life, with the new guy still around (though whether or not he’s an alcoholic is still up for debate), and two new guys who seem to be looking for something real, and thus positive options.

One of them has definitely been flirty, and definitely is looking for the more carnal side of things, but when I told him that I was really looking for something real, so he needed to know that I’d be looking while we played (if we decided to do that), he got a little frustrated and began back pedaling and talking about how it was important that we were passionately compatible, but he wasn’t opposed to something serious if we were.

It’s a thing I’ve heard before, so I’m skeptical that he means it, but he’s intrigued me enough to consider keeping him around. We haven’t met in person yet, and the emotional chemistry we have in person will be an important factor in whether or not he gets to stick around.

The other new guy is another one of those who feels like he’s just looking for a significant other without really caring who the other person is. This is a thing that I get frustrated with, but he’s begun asking questions about me in order to actually get to know me, and if it’s really me he’s interested in, then he’s got a shot.

Both have asked when we can get together to get to know one another better. That’s a good sign, I think.

Meanwhile, my first Bumble Bee has been very busy with a work project, or at least that’s what he said… we’ll see if he really contacts me to get together tomorrow or not. Several of the things he’s said are beginning to come into question for me, and that has to do somewhat with my concern about his drinking.

Here’s hoping that Lugh can help to show me the truth, as the Lord Apollo did after Midsummer.

Better yet, maybe he can help me to get back to writing. I did actually write quite a bit last night inspired by a #MissMuseMe prompt (which has been the inspiration for several of my poems in the past). So here’s a prayer to Lugh, for him to help me to hone my skills: 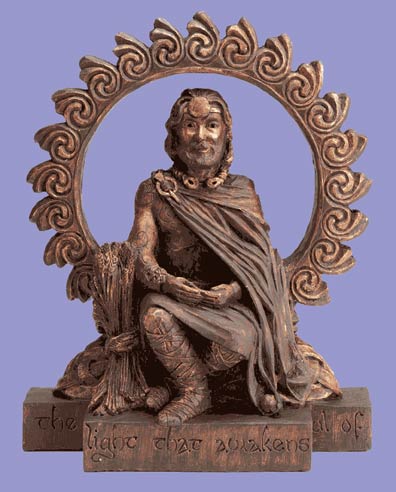