It seems like I say that an awful lot lately, but, then again, I did not have high hopes for this film at all! For one thing, I expected to feel more embarrassed for the characters than I did. I have issues with satirical movies. You know, the parody movies like the Scary Movie franchise, where they make a mockery of legitimate horror stories in the most embarrassing way possible, and yet the characters have no shame. I feel embarrassed for them. The Finnish have a word for it.

So, I went into the movie fully prepared to be uncomfortable because myötähäpeä.

My other concern was that this film was just another silly sequel movie just trying to ride the tails of the original. Those usually lack a story line, and are full of nothing but those slapstick, body humor jokes that make me so uncomfortable… because myötähäpeä.

Luckily for me, there were only a handful of scenes like that. Instead this movie actually had a plot, and in fact, I would make the argument that Mac and Kelly Radner, played by Seth Rogen and Rose Byrne, are NOT actually the protagonists of this story, even though we see the story predominantly through their lens.

The story follows the Radners as they try to sell their house and move into a new, bigger house to make room for their expanding family. Meanwhile, three girls, Shelby, Beth, and Nora (played by Chloë Grace Moretz, Kiersey Clemons, and Beanie Feldstein respectively), decide they want to have a liberated, “cool” sorority that does all the things that sororities are currently not allowed to do, like throw parties that aren’t aimed at just trying to score. And then the third leg of our story follows who I think is the true protagonist: Teddy Sanders, the Radners nemesis from the first Neighbors movie, played by Zac Efron.

Before you continue, be aware there might be some mild spoilers ahead. I don’t think there’s really anything worse than all the spoilers in the trailer, but I figured I better warn you anyway…

As we follow the Radners, the very opening scene with them almost confirmed my worries, as there is morning-sickness vomiting in the middle of a very intimate moment. A visual I didn’t need, and nothing was left to the imagination… Probably one of about 3 really disgusting scenes I would have been happier if they’d been left out.

Another is a scene where Zac Efron’s character is dancing and the camera, which is positioned behind him and between his legs, is suddenly filled with a glimpse of ball sac. It’s an awkward shot as is, but made doubly awkward because it’s not long enough to imply that it’s on purpose, and not short enough to keep the audience from realizing that it’s not real, even though it’s supposed to be.

Obviously, those scenes aren’t indicative of the whole feeling of the movie, or else this review would have gone the total opposite direction.

The interesting thing about this movie is that it feels like a coming of age story for several of our characters.

The Radners have to grow to become “good” parents. Dealing with things like their little girl constanly finding the mother’s *ahem* toys. Meanwhile, they’ve got to keep the new buyers from learning that it’s a sorority living next door because no one would want to live next to a sorority or frat house, as they already know from the first film. It’s not an easy thing to go to war with college kids when you’re a parent…

The girls, for their part, are obviously going through one of many transitions they will go through as college students. The focus in this film is them growing as sisters, finding friends that will last them a lifetime. Not just buying them, which is how I’ve always kind of seen the frat/sorority system, but actually making friends based on more than just superficial standards.

They have a really interesting liberal feminist message that is done surprisingly well. While they point out the ways in which the frat life (and Teddy in particular) is sexist and demeaning to women, they never discriminate against any guys in the obviously misandrist way that a great many so-called feminists would do. They are truly seeking equal rights, which is what feminism was originally about. The fact that they accept and embrace Teddy in the beginning is a sign of true equality and is something I hadn’t expected from such a silly looking film.

But the transition that is the most intense is that of Teddy, hence I think he’s really meant to be our protagonist. Obviously in the beginning he takes the side of the girls, because all he knows is the party life of a frat boy, but he switches sides as he becomes more of a “grown up,” and decides to try to help the Radners to beat the sorority girls at their games. 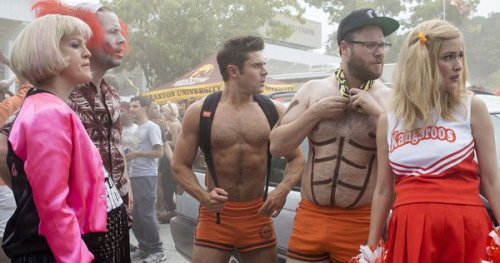 He’s the character that undergoes the most growth and has the biggest emotional obstacles to overcome. He’s got the biggest lessons to learn, and as the movie progresses, he finds his calling.

Who wins? You’ll have to watch it to see, but I’m surprised (and pleased) to say that I did actually enjoy this movie!

I can’t believe I’m saying this, but this movie actually intellectually stimulated me while being good fun for the less intellectually minded individual! My students will enjoy it as much as I do, and that’s a rare feat. I seriously hope that comedy starts going in this direction… assuming what I saw was intentional and not just an accidental byproduct.

3 thoughts on “Neighbors 2, an Unlikely Coming of Age Story”