Someone sent me a link to this article in response to my blog post about Stacey Connor, the woman who gave back her adopted child. I thought that the fact that there were organizations set up just to help with “secondary placements” was bad. Now they’re telling me there are whole underground, online message boards designed for this, called re-homing. 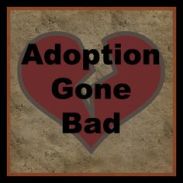 What has the world come to? Children are tossed aside from one family to the next like toys, or puppies, or garbage. In the debate over the original article about the Connors, one man said that basically since he was an abandoned child, “up for adoption in the first place…” it was acceptable to relocate him. He also said: “It does not mean because someone took the responsibility that many of us, or most of us chose not to do, they are to have this child for life.”

Well, buddy, I beg to differ. Agreeing to an adoption means just that: you are taking on that child for life, or at least until they are 18.

But in this country, we choose to throw things out when they don’t work just so. Pants too long? Don’t bother hemming them, throw them out and buy a pair that fits. Broken cell-phone? Get another. TV not the newest and the best? Go out and get the newest one. Relationship not as easy as you thought? End it. School’s too much work for you? Find a way to make it the teacher’s fault…

And now, we’ve devolved to the point where this makes sense on a grand scheme: Not happy with the kid you adopted? Trade them in for a newer model…

The young girl in that article chose not to disclose sexual abuse in order to not be removed from her home and “rehomed” for the umpteenth time. People were passing her back and forth like a dog. As a dog owner, I would like to remind you it’s not really fair for dogs either, but I do recognize (unlike the people engaging in rehoming) that people are a little more fragile/permanent/important than dogs.

If a dog is aggressive and bites the children in a home, it makes sense to send that dog to another home. Children should never be shifted around from home to home, trying to find the right “fit.”